XI’AN, China, April 26, 2022 /PRNewswire/ — The Shaanxi Archaeological Museum, the first archaeological museum in China, was recently completed in Xi’an and will be open to the public on a trial basis from April 28. Prior to that, the Xi’an Museum also had officially unveiled its “new look” after five months of upgrading and renovation. The official debut of these two major museums this month further contributes to the image of Xi’an as a City of Museums. 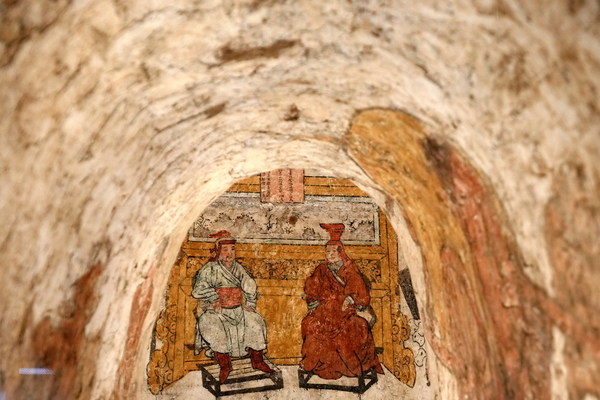 A tomb mural of Yuan dynasty in the Shaanxi Archaeological Museum

Museums are part of a city’s cultural identity and a place for people to feel the history, understand the present and explore the future. Xi’an, China, has made great efforts to make itself into a City of Museums, devoting itself to transforming its advantages in cultural heritage resources, developing its urban culture in the style of Xi’an, and highlighting its unique charm as a thousand-year ancient capital. The Party Xi’an Municipal Committee and Municipal Government proposed to protect the city’s cultural treasures, develop the city’s cultural value, and make culture a bridge between Xi’an and the world.

Located in Chang’an District, Xi’an City, the upcoming Shaanxi Archaeological Museum is a museum that focuses on the development of archaeology as a discipline, and displays the process of archaeological work, techniques and research ideas. The museum has an indoor exhibition area of 5,800 square meters and an outdoor exhibition area of 10,000 square meters, boasting 5,215 cultural relics in 4,218 groups on display. The museum has a number of exhibits that have been restored for protection with new concepts and advanced technologies.

The exhibits include a Tang Dynasty cameleer figurine that is still intact after thousands of years, and Western Zhou Dynasty horse and chariot pits and Yuan Dynasty fresco tomb that have been moved into the museum as “packages” as a whole.

Located in the south of Xi’an City, the Xi’an Museum consists of three parts: the Tang Small Wild Goose Pagoda (Xiaoyan Pagoda), the ancient architectural complex of Jianfu Temple and the museum area. It is a modern history museum integrating museums, historic sites and gardens. In early April, the renovated and upgraded Xi’an Museum welcomed its visitors with a “new look”. More than 1,100 pieces (groups) of cultural relics from the collection were unveiled in the 1,300-square-meter exhibition hall. Among them, more than 100 pieces (groups) will be presented to the public for the first time as regular exhibits of the museum, including the golden tiger ornament from the Warring States Period, the opera figures bronze paperweight from the Han Dynasty and the painted infantry figurine, better showing the historical and cultural heritage of the ancient capital of Xi’an.

In addition to collection, research and display, museums in Xi’an are exploring new opportunities for education, communication and even leisure. Xi’an has integrated museum resources and expanded the role of museums as “schools” so that museums can better integrate into and serve public life. Relying on the rapid development of digital museums and coping with challenges during the COVID-19 pandemic, the Xi’an Museum has brought its collection to the “cloud”, giving lectures through live streaming, and holding concerts for the public.

Welcome to WonderVerse Indonesia! Experience the Beauty of Indonesia Through the Metaverse Technology

Marriott International Continues To Expand Footprint In Australia With The Introduction...